The Vice-Chancellor of the Federal University of Technology Owerri, Prof. Francis Chukwuemeka Eze on Thursday, May 16, 2019, paid a courtesy visit to the Commander of 34 Artillery Brigade Obinze, Brigadier General Yusuf Ibrahim Tukura in attempt to strengthen the bilateral relationship between both institutions.

Prof. Eze in his remark welcomed the new Commander to Imo State and noted that there has been a mutual relationship between FUTO and the 34 Artillery Brigade.

Prof. F.C. Eze disclosed that the Security Advisory Committee has been formed and the Committee comprises of representatives from military and paramilitary groups to handle the security situation on campus.

In his response, Brigadier General Yusuf Ibrahim Tukura welcomed the Vice Chancellor and his team to the Command and commended them for sparing time from their tight schedule to make the visit possible.

He said security is everybody’s business but lamented that the command is currently faced with inadequacy of manpower to cover the 27 Local Governments in the State. However, he assured the Vice-Chancellor that in the subsequent review of the security deployments, the University will be considered.

Reacting to the land boundary dispute between FUTO and the 34 Artillery Brigade, the Commander said both institutions will find a way to involve the Ministry of Lands so that the differences will be amicably and permanently resolved.

Other Principal Officers, Chief Security Officer of FUTO and Director of Physical Planning were also in attendance at the courtesy call. 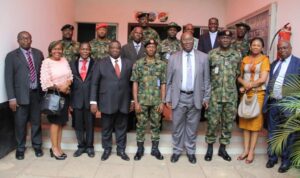 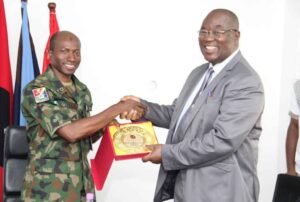